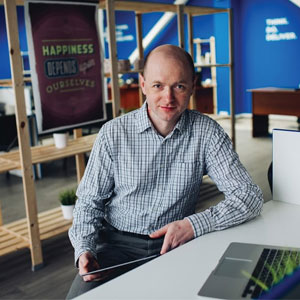 Vasil Tarasevich, CTO
Nearly one and a half decade ago, a bunch of technology enthusiasts got together to create a range of software tailored to meet customers’ real-world needs and founded a web development company—HQSoftware. As they later realized that their strong market position is in bringing web technology to IoT sphere, they carved out a niche for themselves in the industrial IoT arena. “In this sector, one of the biggest challenges today is that device and technology set is nearly unique each time,” explains Vasil Tarasevich, CTO, HQSoftware. This is where HQSoftware steps in with its expertise in making the heterogeneous devices, technologies, and environments work together under one of the industry standards and then build high-level services on top of it—user interfaces and business logic.

Tarasevich further describes another challenge in the IoT domain, “Since the company operates in the industrial IoT, where machines are located inside well-protected private networks of plants and factories, security is not a big issue. However, in other applications it may be.” HQSoftware resolves the security issue both on network level by creating a VPN tunnels between communicating devices and by implementation of encrypted secure communication as a part of proprietary communication protocol.

We are keen on building fast prototypes, POCs, and to make customer confident that solution will solve their problem. This agility is actually the basis part of our approach

“We have strong expertise in creating software for limited environments,” asserts Tarasevich. The company’s engagement with a European provider of end-to-end IoT solutions to automotive, manufacturing, retail and logistic enterprise is a good point in case. The customer was caught up in a challenge to provide seamless data exchange in a highly dynamic mesh network of devices with limited CPU and RAM resources, while allowing remote network management of connected devices in areas like smart homes, cities, and plants. HQSoftware’s solution architecture allows any type of connecting devices into a single wireless mesh network, interconnecting all devices so that if one of them drops out due to a weak signal or mechanical failure, the rest will still be able to communicate with each other. The company believes in mature development processes, which means proper processes are the key to building software that really does the job. “We are keen on building fast prototypes, POCs, and to make customer confident that solution will solve their problem. This agility is actually the basis part of our approach,” states Tarasevich.

HQSoftware is now planning to extend its IoT lab to start quickly with new clients, without waiting for specific hardware, while implementing new emerging technologies. Currently, the company operates mainly in northern Europe and Scandinavia, but is moving forward to do more in the US with IoT-related development. “The moment when intelligent machines will start producing other intelligent machines is close, and we are getting geared up for that revolution,” concludes Tarasevich. 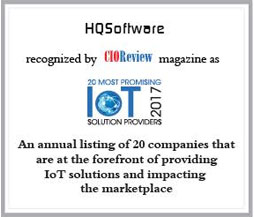