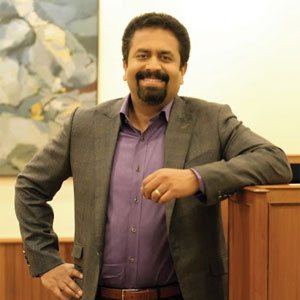 Rajesh C. Subramaniam, CEO & Founder There is a hint of pride and rapt passion, when Rajesh C. Subramaniam, the Founder and CEO at embedUR systems engages in a dialogue about IoT. Fathoms below the IoT labyrinth, Rajesh says that it takes engineering capability of such deep and granular nature, so much so that it keeps even IoT equipment and service providers away from experimenting much. So the million dollar question is: who does the intricate plumbing work for IoT OEMs like Cisco, Arris, Netgear and many others? “We’ve been there. Done that, and now, we are accelerating it,” evinces Rajesh. For embedUR, IoT enablement is right up its alley, and since its genesis, the company has been doing an exceptional job of working with OEMs and service providers to bring IoT deployments faster to market.

"We have taken the train early, reached the destination, and are waiting for the future of IoT as it unfolds"

As early as 2004, when the market for the “connected things” had just begun to brew, Rajesh discovered the potent that embedded networking pronounced. “I chose embedded networking as the space itself was unique,” he says. “It was that uniqueness, which gave us the differentiated value proposition to start with, from where we set out to become the experts in this specific domain.” With a team of equally enthused and skilled embedded networking professionals, embedUR put its war chest to work on product engineering services and soon the team narrowed down its key areas of focus: wireless, access, mobile, and switching. Although these variables that form the IoT equation took their own share of time to grow and gain traction, embedUR always ensured that it stayed a step ahead of the industry’s course of progression.

The Ramp to IoT

Pioneers in wireless (and switching) technologies like Cisco, Avaya, and Motorola with their spread of solutions from Bluetooth to cellular were selling their products rapidly and in large numbers. In due course of time, challenges associated with the management of the wireless bandwidths created certain problem areas for a lot of these service providers. Especially, residential wireless networks were put to test by interference coming from microwave, Bluetooth, or baby monitors to name a few. “In some cases, problems arose, when the wireless gateway was in close proximity to the router of the next door neighbor,” explains Rajesh. It took huge amounts of operational costs for service providers to send field agents who would figure out the problem and find a permanent fix.
“Having built our business model around wireless technologies, we worked with these service providers addressing their Wi-Fi needs, to understand and help them manage their networks and implement new products for them.”

All of this led embedUR to build its product—embedUR Wifi Analytics and Radio Resource Management (eRM)—which essentially laid the cornerstone for embedUR’s grand entry into the IoT arena. The automated system has Wi-Fi analytics and radio management features and dynamically handles resources to maintain optimal network performance. “This was when we realized the growing number of service providers’ gateway devices entering the wireless spectrum every day,” states Rajesh. “Suddenly, wireless management reached newer heights of magnitude.” In order to bring control to these devices, embedUR devised a plan to build “something” that can easily be retrofitted into these existing devices as well become an integral part of future devices. “It had to be a simple software package without the operators having to go swap out units,” explains Rajesh. “That’s how we developed the eCloud Agent, a highly-scalable embedded networking entity that is agnostic, in all dimensions.”

An Agent of Change

Designed to run on any protocol, any format of data, the eCloud agent can be a part of any device, such as thermostats, motion sensors, smoke alarm devices, or light fixtures and it essentially solves one of the most notable requirements that service providers have with respect to wireless networks—data collection. From tracking who is entering the network to monitoring radio parameters, the eCloud Agent acquires all information and then communicates it over to the cloud, where embedUR has its server software running. It is the work of the software residing at the eCloud Server to accept the multi-formatted data and interpret it based on equipment vendor APIs.

However, there is a seed of truth in assuming that these sophistications typically costing several millions of dollars can be easily afforded by Tier-1 enterprises. But for the Tier-2 and -3 organizations, their IT teams are rarely equipped to handle the complexities of on-ramping their IoT data accrual processes and analytics on to the cloud. “embedUR has just the product they need—affordable license-based solutions that suffice the IoT readiness of such organizations,” elucidates Rajesh. “Once we license our agent to our customer, our services team works hand-in-glove with them to help with the migration and get their products to the market faster.”
The eRM solution includes a device agent to establish the cloud link and collect the data; a secure reliable and scalable standard based protocol for communication with the cloud, a dynamic massively scalable database, and patented analytics processing engines. embedUR’s customers can also choose between storage types, from private to public cloud like AWS, or hybrid in-house storage.

Working in tight partnership with the telecom sector leaders has its own perks, and according to Rajesh, it holds a promised ticket on insightful previews of where the future of the industry is headed. “The reputation that embedUR has built ensures that we remain in the loop and know where the journey needs to go, so that we can channelize our efforts and run along with the trends,” affirms Rajesh. This also puts the company in a sweet spot, in the fairly competitive industry, where telecom service providers and OEMs are briskly pushing innovative and inventive devices into the market. In the wake of Microsoft joining the residential IoT space, by laying its wager on Project Evo to race with Amazon’s Echo and Google’s Home, an inundation of devices are soon to flood the network.

At the elementary level, to make these million pieces fit into the bigger IoT puzzle, and for the IoT adopters to make any sense out of it at all, there needs to be sufficient scale, scope, and the ability to expedite the entire lifecycle from data acquisition to analytics. For its part, embedUR envisions an autonomous paradigm, where it develops the necessary infrastructure, allows thin agents to onboard any of these devices, have the server side applications automatically scale and interpret the data. Rajesh predicts that this will be a compelling trend in the future and his company is knee-deep in leading it. His tenacity has set an example for his employees, where teams take ownership of customer demands, personally commit to a date, and deliver on the promise. This has made it a favorite among OEMs and service providers, where all their customers have to do is “imagine” and “it gets done.”

For years, the veil of conundrum over IoT has been impeding adopters and prospective adopters from putting it to ideal use. Now that it has been removed, it is up to service providers to cater to the demands of the enterprise universe and tie every singular ‘thing’ that constitutes the ‘Internet of Things’ together. With plenty of headroom to grow, IoT is marching leaps and bounds with a market size that is estimated to double every five years. When it comes to that, embedUR is all systems go, being an essential cogwheel in the mechanism to stay a step ahead and prep up the world for the next growth wave in IoT. “We have taken the train early, and are awaiting the future of IoT as it unfolds,” comments Rajesh. 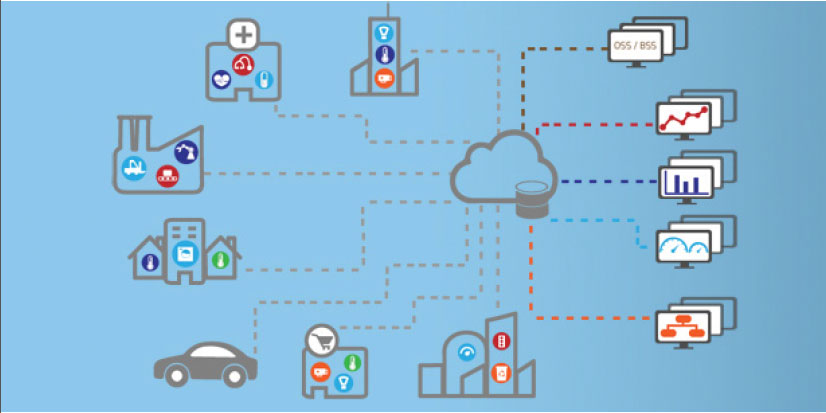 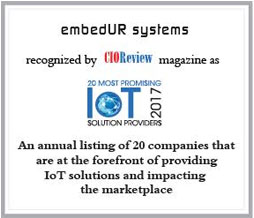