Dilip Rahulan, Executive Chairman and CEO Many saw Dubai as a mere desert and a stagnant landscape, before it became the economic powerhouse of the Middle East. Today, its ingenious skyscrapers, audacious islands, and techno marble airports are the epitome of preeminent engineering and projects, which has captivated everyone across the globe. In an effort to make the impossible possible, the government of Dubai, called as ‘Dubai Smart Government’ summoned the leading tech titans, whose unmatched prominence in engineering and machine intelligence could transform the vision of Dubai’s government into reality. Dubai’s very own native organization, Pacific Controls was one of them, whose mission was to realize the foresight of its city to make interconnected network systems for major infrastructures. Pacific Controls leveraged the nexus of Internet of Things (IoT), networked computing, and large-scale data management to provide technology solutions and values.

Going Beyond the Traditional Methods

Pacific Controls started its journey in 2000, at the same time when the word automation was becoming the bedrock and the definition for every infrastructure and government service such as water distribution, energy, and transportation.“The plan was ready, the decision was made. Automation wired with IT, networking, and engineering were ready to create unprecedented tides in Dubai,” exclaims Dilip Rahulan, Executive Chairman and CEO at Pacific Controls. The company spent no time in lowering its sails and hoisting its anchors to begin its journey.

From the offset, Rahulan knew that traditional engineering methods would have zero significance in tech driven projects of Dubai. Internet of Things (IoT) technologies had to take the helm to shepherd the vision of setting up unrealistic infrastructures that could take care of themselves without any human intervention. Gartner defines a smart city as an urbanized area where multiple sectors cooperate to achieve sustainable outcomes through the analysis of contextual, real-time information shared among operational technology systems.Pacific Controls was among the few who possessed such expertise in conferring integrated services, backed with network solutions that could facilitate operations in hotels, residential, and airports. Guest room automation systems of Pacific Controls were designed to address the hospitality industry holistically. “It includes the whole concept of hotel automation, which gives guests the convenience of


controlling multiple functions in their room including lighting, temperature, drapes and audio/video systems using automated interfaces,” says Rahulan. Such innovative offerings are the reason behind the growing tenacity of Pacific Controls in the IoT domain. “With connectivity at the helm, we are aiming to deliver services that can go beyond the traditional methods,” states Rahulan.

Creating New Frontiers in the IoT

When Pacific Controls was mandated to enable the integration of multiple systems in the airport, the objectives and the demands came with unprecedented responsibilities. However, with Pacific Controls’ Building Integration System (BIS), the company successfully integrated automation systems for security, fire alarms, lighting, public address, and resource management, and various other imperative aspects.

BISfunctions as an Airport System integrator that empowers different Extra Low Voltage Systems to exchange data with each other in an effortless and comprehensivemanner. “With BIS running in the background, there was now a seamless exchange of flight updates between Management Information System, Lighting Control System, and Access Control System,” says Rahulan. He further goes on to add, “BIS aims to bring the different Airport systems to one common integrated platform where data can be monitored and analyzed for better operational efficiencies.”

In 2005, Pacific Controls was bestowed with another opportunity—this time to embellish private and government buildings with its state-of-the-art M2M solutions. “The project was given the name of 24x7National Life Safety,” says Rahulan, which underlined the ambition of the project. The mission-statement of this project was to provide 24X7 real-time monitoring of infrastructures for fire, lift, and emergency alarms. The integrated system laid by Pacific Controls allowed authorized personnel to access relevant and up-to-date information at any time, and from any web-enabled devices—whether the individuals are residing at the emergency service headquarters or attending an incident. Over the next few years, 60,000 buildings will have this integrated system running within their infrastructure, enabling the admin to monitor them continuously.

To imbue life in the buildings is the vision with which Pacific Controls is creating new frontiers in the IoT ecosystem. However, the expedition is not just limited to infrastructures. Pacific Controls has developed Galaxy, which is the world’s first enterprise platform delivering city centric services for management of its
ecosystem comprising of energy, real estate, homeland security, healthcare, hospitality, transportation, education, financial, industrial, and retail.Galaxy will integrate with management information systems to deliver optimization and governance centric data that will enable cost reduction of operating a city and its services through increased operational efficiencies and peculation of real time data to the relevant decision makers in the city. “Hosted from our enterprise cloud, Galaxy ensures security of the embedded system as it creates value proposition based on observing abnormal behavior of the machine,” explains Rahulan.

We have spent a phenomenal volume of our resources to roll out low cost asset management of smart devices, which can meet the goals of the customers vehemently

The company is also offering its artificial intelligence framework GBots, for virtualization of managed services and for the delivery of real time business intelligence. The intelligent, autonomous, experienced, and cognitive software agents will be deployed across networks and can be utilized for diverse tasks across the world.

“One of the predominant challenges associated with M2M was the cost of enabling devices to become smart and connected,” says Rahulan. To enable organizations leverage the potential of M2M, it was imperative to introduce solutions that are not only resilient, but cost effective too. “We have spent our resources to roll out low cost smart devices for asset management, which can meet the goals of the customers vehemently,” says Rahulan. “Today we are delivering our M2M products, which are cheaper than other embedded devices in the competition.” Through collaborative relationships, the company possesses access to various protocols and services that ameliorate their M2M expertise to a completely new level.

It is Just a Start

Pacific is collaborating with laudable Telcos to enhance their capabilities. With Microsoft as their strategic partner, Pacific Controls has already embarked on a mission to launch the world’s first Microsoft Center of Excellence in Dubai that will facilitate the government to migrate to the cloud.

These are just some of the snapshots of the ‘to-do’ list of Pacific Controls. IoT is still in its evolving state, and it’s quite apparent that there will be a whole new range of unprecedented challenges stemming out from it. To make the world more technology driven in the coming days,the responsibility rests on the shoulders of preeminent organizations in the IoT space and it goes without saying that Pacific Controls is one of them.

Description
A global provider of end-to-end managed application services and solutions for machine-to-machine (M2M) and Internet of Things applications. 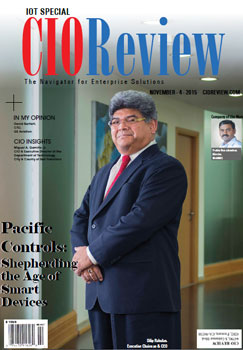